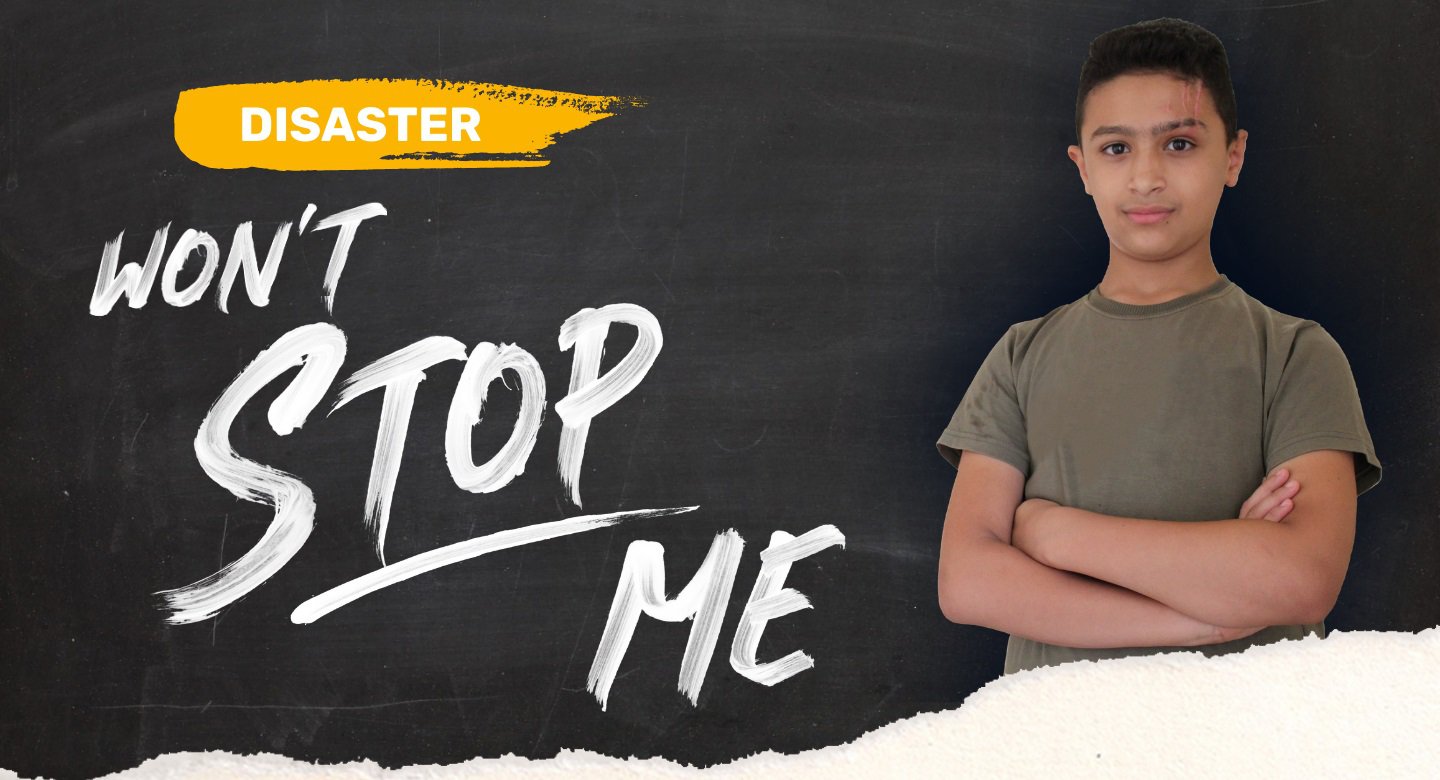 Daniyal, 12, is in a church in the Karantina quarter of Beirut, playing with other children in one of the few buildings that’s intact. They gather in a circle, passing a ball back and forth while they joke around with one another. They’re the latest group of children to receive special play-based mental health support from a Right To Play program run out of the old church.

At the end of the game, Daniyal helps the coach gather up the ball and put it away. The sense of confidence and calm he’s showing is a big change from just a few weeks ago, when Daniyal, like thousands of other children in Beirut, was struggling to recover from suddenly losing his home.

On August 4, 2020, an explosion devastated Beirut when improperly stored fertilizer and fireworks ignited in the port. When the smoke cleared, more than 150 people were dead, 5,000 injured, and 300,000 people left homeless. Daniyal’s family home was one of those that were severely damaged by the blast.

Daniyal had been outside playing with other children when the fire started, and he was running home as the explosion hit. Daniyal, along with his mother, father, and sister, were injured when their windows were blown out by the explosion.

“My husband was asking me if I was in pain and I was wondering what he was talking about?” Mona, Daniyal’s mother, says. “I didn’t know that I was covered in blood.” 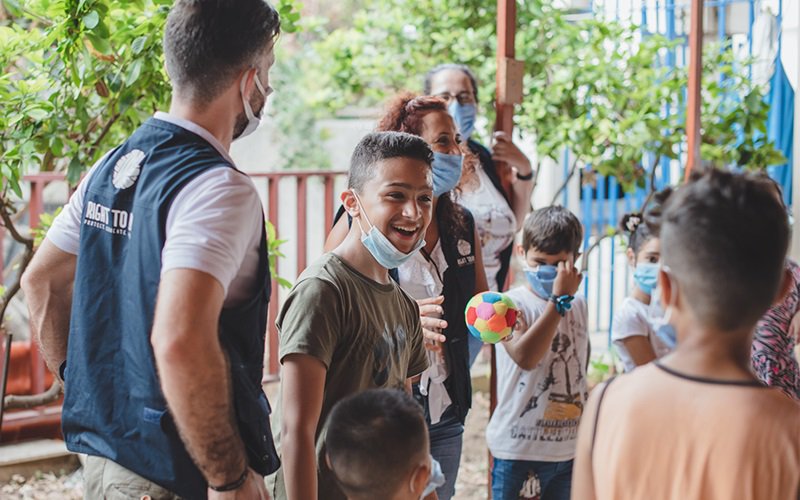 “I don’t like to talk but I need to do something when I feel sad. I want to play. I want to throw this anger on a ball not on people.” – Daniyal, 12

Mona, Daniyal, and the rest of the family received medical treatment and then left their home behind to stay in the living room of a friend’s apartment that had survived the explosion intact. But even though their physical injuries had been treated, mental scars remained.

“We had stayed several days at our friend’s apartment. We wanted to return back home but our children refused to because they fear experiencing the same event again,” Mona, Daniyal’s mother says.

Daniyal and his sister, Shatha, 9, had nightmares about the explosion. Both were withdrawn, and sensitive to anything that reminded them of the event. At one point, when Mona brought them back home briefly to strip the wallpaper so the house could be repaired, the smell of the diesel they were using to dissolve the glue caused Shatha to break out in tears because it reminded her of fire.

“I didn’t notice that he was suffering that much. I was wondering why he drew a tiny heart surrounded within a big black circle.” – Mona, Daniyal’s mother

Daniyal became sad, bored, and angry as his social life collapsed. He and his friend group had been broken up by the explosion and displaced across Beirut, making it hard to see one another. Whereas before they could use masks when they saw one another, the diversion of medical equipment to treating victims of the disaster meant that he was stuck inside most of the time. He started acting out and hitting things to express his anger. 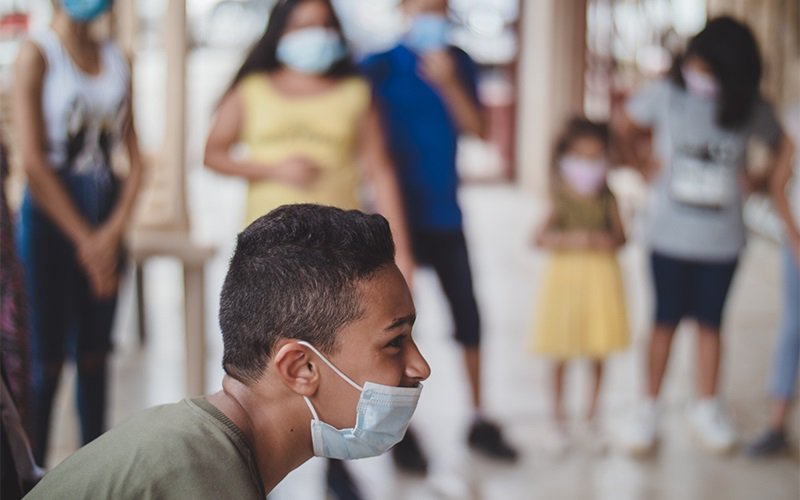 Mona wasn’t sure what she could do for her children, until she heard about Right To Play’s play-based mental health program for children that had started up just a week after the explosion.

“I knew from the neighbors that psychosocial sessions were starting near to our house. I could see how my children were excited to take part in the sessions. They are the ones that convinced us to return home,” Mona says.

The family returned to their home and Daniyal and Shatha started attending the sessions. Trained coaches lead the children in games and activities that help them express their emotions positively, learn coping skills, and stay mentally strong. At first, Daniyal had trouble with the other children. He was still withdrawn and angry, and he would push them away when they tried to interact with him. 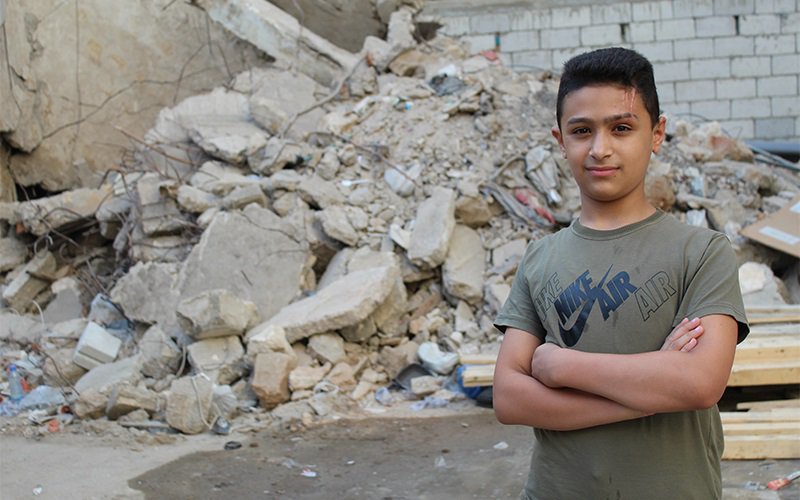 But the coach running the program came up with a solution. She appointed Daniyal her assistant. He would help her take out the equipment, run the games, and then help her put it away. Soon, he began opening up to the other children and playing with them.

“I didn’t know that teachers can have assistants. I’ve never tried being an assistant to a teacher. I was given this mission and it makes me feel proud of myself,” Daniyal says.

The sessions helped Daniyal and Shatha begin to recover from the emotional scars the explosion had left.

“I think that the drawing sessions have made [Daniyal] feel confident about himself. He likes when others are curious to know what he drew and prompt him with question,” Mona says. Shatha also showed improvement after starting the sessions, Mona said. “I know whenever [Shatha] attends a session she breaks her silence with a smile.”

“Our future doesn’t work without the past. I want to help in creating a better future.” – Daniyal

Daniyal and Shatha are just two of many children who have benefitted Right To Play’s rapid mental health response program in Beirut. These children have seen crisis upon crisis piling up this year – COVID-19, financial collapse, civil unrest, and the explosion that levelled much of Beirut in August.

HELP KIDS STAND UP TO CRISIS